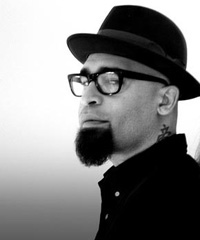 Last song of 2020 - Available for FREE on bandcamp: Hello Earthling 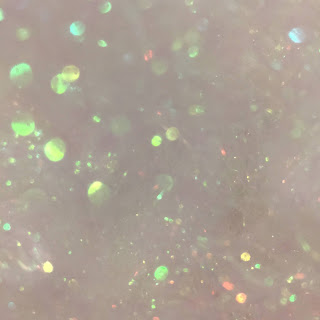 As the Apocalypse rages on, I am continuing to work on my soundtrack to 2020 (which I'm releasing for FREE, in "real time," on Bandcamp). But yesterday the weather was perfect, so I took a break from being inside in the studio, and got some nice photos of The Oracle. We did the shoot outside in the back yard. Thank you to Crystal for inspiring us to do this! 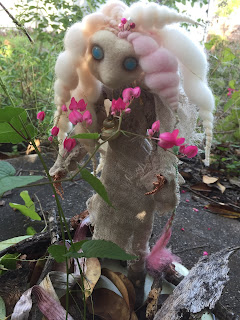 Taking time to smell the flowers. 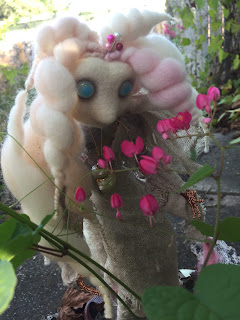 Appreciating the detail of the Coral Vine. 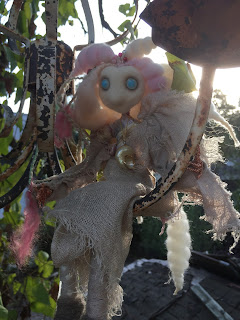 Hanging out in a chandelier. 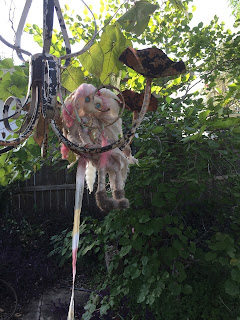 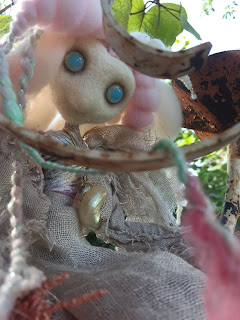 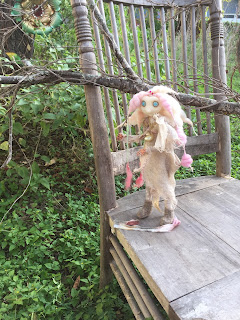 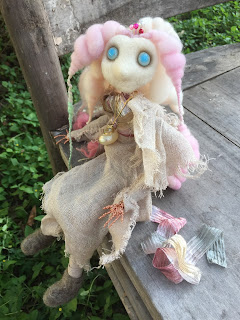 A well-deserved rest.
Posted by Hannah Fury at 2:54 PM

In Appreciation of Spiders

Hi everyone. It’s been a while. I hope you are all managing to find some light. If you can't see any now, I hope you will actively look for it in the places where your intuition tells you to.

I’m in the first year of mourning my husband, and am still finding it very hard to be socially engaged in any way. I’m starting to put the pieces back together in my life, but it’s a slow roll. I'm beginning to feel capable of responding to emails, messages, etc., and I just want to thank everyone who has reached out to me.

At first, after my husband died, I felt an extreme amount of weird energy to “get things done” and organize and tear everything apart. It seems a little crazy now, but grief does strange things to people. I also suspect that I "sensed" what was going to happen to the World. I was so lucky that I had friends, family and his amazing co-workers help me through that time. My step-son and I were muddling through our sorrow and we had even begun to organize some things when The Virus happened. You all know the rest because you have all been experiencing it, too, in your own lives.

At one point, I went through a kind of a shattering of reality, and I found myself completely unable to move for about a month. I was literally unable to leave my bed except for essentials. It felt like I was feeling the trauma of the entire World and the Earth itself - physically, emotionally - and in my psyche/soul. I’ve never felt anything like it before. It felt really, really bad, but eventually it lifted, and after it was over, I felt very connected to the multiverse in a strange way, and even began to feel like things were going to be okay somehow. I started feeling creative again, which was very unexpected. I hadn't planned to do anything musical for a very long time, but instead I felt completely inspired. And I felt very, very connected to my husband, too.

I was already experiencing a great deal of what used to be called paranormal activity. I think of these things as absolutely natural. And I was getting "signs" on a regular basis — serendipities, coincidences… phenomena that are unexplained by Newtonian science. So to feel this way now, isn’t really that far from what I was feeling before the lockdown. But now, after having the opportunity to really contemplate all of this, I am beyond convinced that this is a transformative time to be on Earth. Transformation is difficult, but if we can rise to the challenge as a species, I think we may arrive in a better future. It’s a time of evolution, of becoming more whole as beings, of listening to your heart and soul. Whatever that is for YOU. I can’t explain any of this, and I've always loved mystery anyway, so I think it's okay to not have the answers. I don't know how to DO this, except to attempt to do my best to create things that are in alignment with what I'm feeling. I will just say that it seems like the veils are becoming very thin, and we are ALL more than we know.

I have uploaded a new triptych of songs (“Spidersong”). It's FREE on band camp. It's a Thank You to anyone who has ever listened, or will ever listen, to my music. 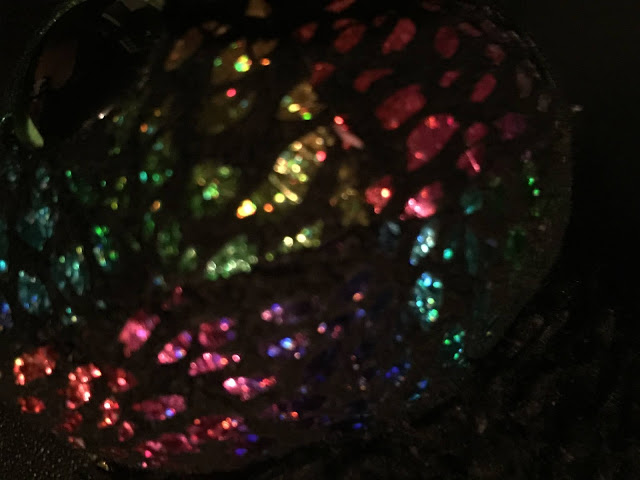 I am trying very hard to make sense of the world right now, and have been looking into a lot of things. I have been seeing and feeling much high strangeness everywhere, and I’m working through it in music, as usual. Grief has caused me to “lose” the upper register of my voice (this has happened to me once before, and it will probably resolve eventually -- it's still very early days). But still, I’ve been inspired to write a lot lately, so I recorded some new songs anyway. It's a six-song EP entitled "The World We Want." The songs are on Bandcamp, and they are FREE. 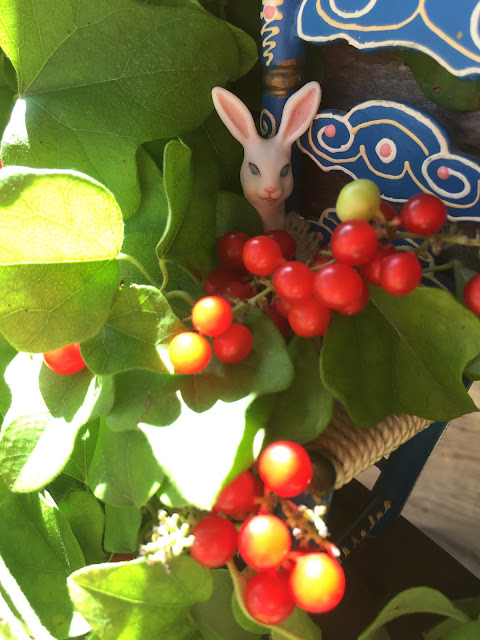 Today is the six-month anniversary of my beloved husband's passing. Strangely, it is also his Birthday. His son and I are convinced that he did that on purpose. He was capable of mystical calculations and had a great appreciation for cosmic symmetry. He was/is my soul mate, and I miss him more than it is possible to express. The sadness has been almost unbearable. The intimate family memorial that we had planned had to be cancelled because of the Coronavirus. These are strange times for everyone, and everyone is dealing with a lot of uncertainty and loss. It's difficult to keep spirits up, but I try to go outside in the backyard for a few minutes each day. We planted some beautiful things back there, and they are all blooming right now. The Coral Vines have covered everything in sight, and they are attracting lots of bees and butterflies. The neighborhood is so quiet nowadays because there are so few cars out, so there are always lots of birds out there singing their songs. He always befriended small creatures, and I try to keep an eye out for those. I have received many signs from him over the past months -- a fox on my roof, a chance encounter with a reluctant psychic medium/mystic who approached me in a Target parking lot and blew my mind. And many, many other things. All of them have been so strange and so significant, but it's hard to write about them. I've been keeping a running list, though. Unfortunately, for the past two months, I have felt an indescribable heaviness. As if the air around me is thick and unbreathable. And it seems like gravity or electromagnetic fields are pushing me down and collapsing my lungs. I feel unreal. Not really here. Sometimes I wake up and have to pinch myself to make sure I am still in existence. But I forced myself to go into my studio today because he was always so happy when I was in there working on music. When he was having his treatments he was often very tired, and he said he always slept better if I was working on something creative. I ended up deciding to put some songs up on Bandcamp.
The collection is called "Little Family." It is FREE. I felt it was a good way to both mourn and celebrate him today. 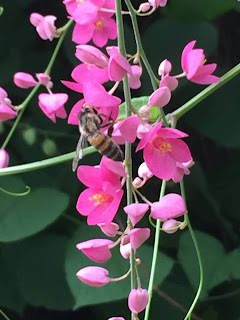 True Love Will Find You in the End 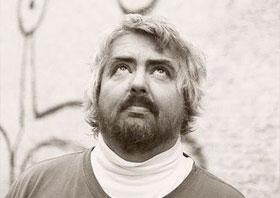