Some Songs I Love

It's hard to describe how I felt when I first heard these two songs. They were just so different from anything else that was on the radio at that time. Full of violent, gritty lyrics, totally unfamiliar words, vehemence and even sarcasm. I was just a little feller, but I was very aware that the person behind the song was expressing something that really mattered. These were songs of warning, suffering and pain. Not imagined, acted out, or spoken about on behalf of others (like most conventional protest songs). The lyrics were beyond personal, but much too specific to be universal. They were direct and purposely targeted -- heat-seeking missiles, smart bombs. It was clear that this communication was coming straight from the source, from someone who was living it. The realization that songs could deliver that kind of information made a very strong impression on me.

I know some folks are convinced that 2013 is the year of the Snake, but I'm pretty sure that it's actually the year of the Octopus. Probably one of the most obvious attributes of the Octopus is the fact that they have eight -- count 'em, eight -- arms. That's way more than a Snake has. Also, Octopi are pretty much supernatural and uniquely able to dramatize how they feel. And before we get too far, let's just get the most important thing out of the way. Here it is: Octopi have three hearts. Can you believe it? It's hard enough having just one heart to take care of, so imagine handling the emotions and aches of three. It's inspiring. And they do it every day of their lives without complaint. Another reason why they should own this year is that they're really lucky, and in a year ending with the number 13 and whose very existence was once threatened by the Mayans, we need all the luck we can get. Why are Octopi so lucky? Well, because they get to use "i" to designate the plural of themselves. It's rare that a creature gets to be pluralized by "i," and rarer still that they deserve the honor. In addition, Octopi have developed a variety of magical talents, like the ability to change their color and texture whenever they please. And as if that's not enough, they have chromatophores (luminescent cells) that enable them to light up their delicate skin with a colorful and impressive reflective neon glow. Also, they have a beak, and can use tools! What?! And they can fit into really small spaces. Could probably fit into a keyhole if it came to that. Best of all, they can shoot clouds of mysterious darkness to signify their annoyance when ne'er-do-wells try to get in their way. And they have tentacles! Damn! Their telepathic abilities are legendary, so it should come as no surprise that they are gifted clairvoyants, can predict the future, and know all about time and space. Jealous? I know I am. Most Octopi are friendly if you get 'em on a good day, but if you see them in captivity they are likely to be appropriately judgmental. Fact is, Octopi already secretly rule the Universe, so we might as well officially give them this year. A "bilaterally symmetric" creature with eight arms and three hearts? Join me in giving Octopi some love in 2013 and forever after. 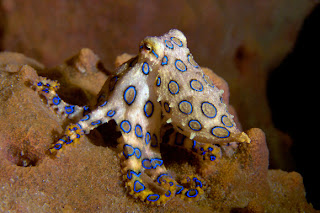