A Thing of Love and Beauty

I posted on Facebook about the birthday spoils that I recently received on April 23rd. But I also received something else that I decided to write about here instead. There's some pertinent background info that is needed:

I had a birthday several years ago, as seems to be the custom on this planet. But being chronologically challenged as I am, I can't remember exactly when it was. I'm pretty sure that my nephew was only about two years old at the time and we were celebrating my birthday at his home. He gave me a present that he was so excited about -- he could barely contain himself as I unwrapped the tissue that held the gift. He was so excited that he even almost told me what it was before I opened it. His little belly sticking out and his arms and hands fluttering and his whole body quivering and wriggling with joy as he helped me with the wrapping -- "It's a pink stone shaped like a heart!" he practically shouted just as I finally removed the paper to reveal the treasure inside. Yes, he could speak in full sentences even though he was so little, and yes, that's what it was -- a beautiful, sweet, perfect heart made of rose quartz. He had carefully chosen it especially for me from a basket full of stone hearts at a store they had gone to. My sister told me that it was completely his idea to buy it for me for my birthday -- no one had pointed him in that direction; he had just known that it was the right gift for Auntie M.

Well, I kept that little heart with me everywhere I went. It was in a little velvet pouch in my backpack for years. It came with me to my day job (The Mütter Museum), it came with me to the grocery store, it came with me on buses, the subway and on long walks, of course, since that was my primary mode of transportation. It even accompanied me on the many out-of-state trips that I made over the years to both Texas and California. Every time I got on a plane I held it in my hand for good luck. It was a well-traveled little pink heart of stone. But then one winter evening I discovered that the little pouch was gone, and so was the heart. It must've fallen out in the darkness, into the snow, without making a sound. Maybe it snagged on something as I pulled out a bus token or my keys or gloves. I looked everywhere for it, but it was nowhere to be found. I was so sad. I kept the loss a secret from my sister for the longest time because I hoped that it would turn up somewhere in my house. Maybe I had accidentally taken it out of my backpack when packing for a trip or something, right? Anyway, that's what I told myself, and that's what I hoped for many years. But the little heart never did show itself again. Hopefully, somewhere, someone found it and kept it in their backpack for good luck, or maybe they gave it to someone special in their life. That's what I hoped. All I knew was that I had lost one of my most precious possessions. And while I know that it was only a "thing," it was a thing given to me by someone I love more than I could ever express, and it was given to me because of his love for me, and because he knew I would appreciate it as much as he did. I often pictured how his little face looked when he gave it to me, lit-up and shining, and how his little body just couldn't stop wiggling around because he was so happy about what he had found for me. That's why I cared so much about this thing that was "only a thing."

Well, this year I also had a birthday, and this time my nephew had a more elaborate plan in mind. He is very into nature right now, and he had drawn and designed a tree, which my sister cut into a pattern and together they stuffed and sewed it. She is an expert seamstress, and he is learning, because, as he proudly showed me, he "stitched part of it himself." In addition to this tree, he said, I will eventually receive a tree that depicts each season. Summer, Spring, Fall, and Winter! I'll need to be patient, but someday I'll have the whole amazing set of four trees. But it gets even better, because inside the package with the tree was a little pouch. And inside the pouch? You guessed it: A little heart made of rose quartz! My sister had told him the sad story of the first heart, so he understood how much it meant to me that he chose a replacement. And trust me, he understands the complex nature of treasures and how they can bring happiness even though they're only things. So, it's "just" a "thing" but it isn't just a thing. It is a thing of love and beauty. And while I'm not the packrat I used to be, I love to look around me and see those kinds of things. Things that are beautiful, things that sparkle, things that I found unexpectedly or things that were given to me by someone I love. Those things are more than things, they are treasures. Here are my new ones: 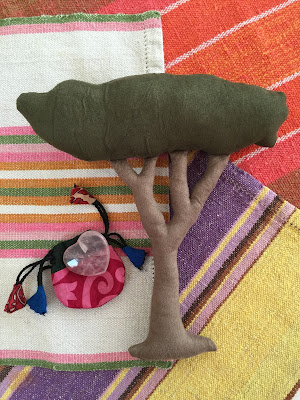 The tree with the pouch and rose quartz heart. 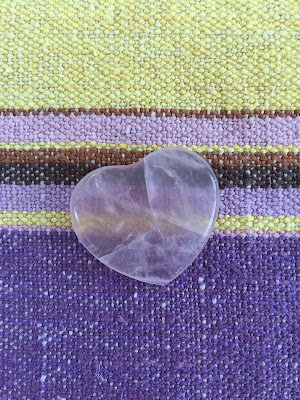 A close-up of the heart.